Stockholm, March 14 2019 ­– Nordea, the largest financial group in Northern Europe, today launched a unique programme at its head office in Stockholm to battle the use of single use plastic bottles by providing staff and visitors free water on demand – so long as people don’t use throwaway plastic bottles..

The banking institution has installed a unique water hydration station from Bluewater, a Stockholm-based world leader in water purification technology and solutions, to provide staff and visitors at its central Stockholm office purified water free-of-charge refills, served still, sparkling or chilled, so long as they don’t use plastic bottles.

“Swedes are blessed in that the quality of water coming out of their taps at home or at work is largely safe to drink, but that’s not the same elsewhere on our planet where fears about what’s in the water are driving increasing sales of plastic bottles, which take hundreds of years to decompose,” said Anders Jacobson, co-founder and CEO of Blue, the Stockholm-based investment company that owns Bluewater.

Jacobson added that Nordea is demonstrating how business can play a vital role in reshaping how people can access sustainably-sourced water and support the evolution of digital water technologies for the future at the same time as they educate a wider population about the acute issues that access to clean drinking water and the use of single-use plastic items represent.

Bluewater hydration stations are widely used today in China, South Africa, the United States and elsewhere, harnessing patented Swedish technology that removes most all known contaminants from tap water as well as enabling purified water to be created at source to remove the need for costly and polluting bottle transports.

“Nordea is setting a hugely positive example for other companies to follow by reducing its plastic footprint as the first company to my knowledge in Sweden to pro-actively work to reduce its plastic footprint by removing the need for single-use plastic bottles altogether”, said Anders Jacobson. 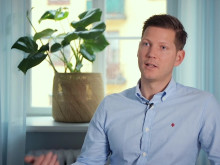 Nordea, the largest financial group in Northern Europe, today launched a unique programme at its head office in Stockholm to battle the u...